The future of the automotive industry lies in electrification is
not a topic for a debate anymore. However, what is being debated is
how quickly the world will be able to let go of its century-long
dependence on fossil fuels and embrace electric-powered vehicles.
Several factors will play a role in determining this pace,
including the availability of enough batteries to enable this
transition.

Currently, there is an installed capacity of about 948 GWh for
lithium-ion (Li-ion) batteries globally. Out of this, nearly 274
GWh was utilized to cater to the Li-ion battery demand from the
automotive industry. If the electric vehicle (EV) sales in the last
two years is anything to go by, the EV segment is set to become
mainstream in the next couple of years. The addition of tens of
millions of EVs every year will also require several thousand GWh
of batteries.

The growth will not only be driven by established cell
suppliers, such as CATL, LG Energy Solution, and Panasonic, but
also some promising startups, including SVOLT, Automotive Cells
Company (ACC), Northvolt, and Britishvolt.

While the automotive industry will continue to heavily rely on
outsourcing, establishing partnerships with cell manufacturers to
mitigate supply chain risk will be an important sourcing strategy
for most OEMs in the years to come. From about 5% in 2021, cell
sourcing from partnership companies will account for about 22% in
2027. There are some OEMs—such as Tesla and BYD-that are also
betting big on in-house cell manufacturing. Nevertheless, in-house
production is and most likely will remain the least-favored mode of
battery sourcing among automakers. 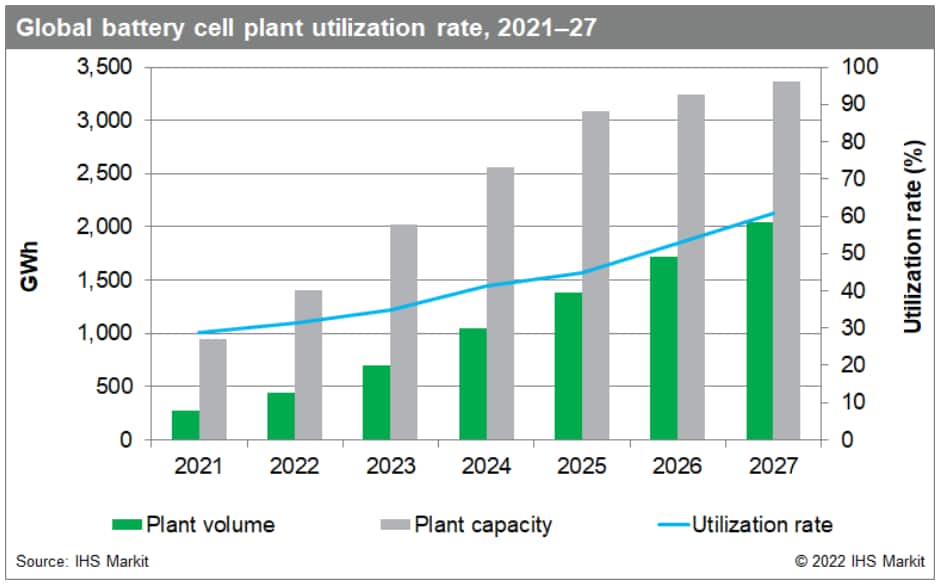 The build-up of manufacturing capacity for Li-ion batteries is
expected to vary across the different regions depending on the EV
demand and prevalent regulations around localization requirements,
production subsidies, and zero-emission vehicle (ZEV)-only
mandates. Greater China has already taken a significant lead over
all other regions in terms of installed battery capacity.

In 2021, Greater China region had installed capacity of about
166 GWh, which was more than 72% of the global capacity. Greater
China, an attractive destination for manufacturing cells due to
several reasons, such as government support that allows faster
plant setups and its low cost of manufacturing. Another notable
factor for cell suppliers to set up plant in Greater China is the
local availability of raw materials for battery production.

Greater China controls a huge share of the supply chain for
cobalt and lithium, with mainland Chinese companies having
ownership of some of the biggest mines around the world. Although a
good chunk of the material is mined outside the Greater China
region, it is then imported into mainland China for further
processing. This has made mainland China the biggest producer of
refined, battery-grade cobalt and processed lithium.

However, in a bid to reduce dependency of Greater China for
cells, most governments are looking to build their own battery
manufacturing setup. Europe is the second-biggest manufacturer of
Li-ion batteries with 126 GWh capacity but is fast closing the gap
with Greater China. By 2027, Europe’s share will grow to 22% of the
global capacity, compared with just 13% currently.

LG Energy Solutions, the spun-off battery business of LG Chem,
is the biggest cell manufacturer in the region, with nearly 70 GWh
capacity at its Wroclaw plant in Poland. LG Energy Solutions’ plant
will increase its capacity to 100 GWh in 2025, which will be
similar to that of Tesla and CATL, both of which are in the process
of setting up plants in Germany. Compared with 56% of the installed
capacity in Greater China being used for light vehicle segment,
Europe will have a much higher capacity utilization of about
74%.

North America will continue to trail Greater China and Europe
until the end of the forecasting period but will see the highest
CAGR growth among the three regions. One of the reasons attributed
to this would be the increase in number of government initiatives
to accelerate uptake of EVs. The most recent, and probably also the
most influential one, is the infrastructure bill, which was signed
into law by President Biden late last year. The law outlines
several actions focused on setting up EV charging
infrastructure.

Currently, North America has a battery production capacity of
about 63 GWh, all of which is in the United States. This will
increase to more than 580 GWh by 2027, at a 44.8% CAGR. While the
majority of the Li-ion battery manufacturing capacity in the North
American region will be set up in the US, Canada is also looking to
have some local manufacturing of Li-ion cells. Canada will more
likely play a critical role for the North American battery market
in the battery material segment. Canada has rich reserves of key
battery materials, such as cobalt, lithium, and nickel.

Japan/Korea region, which is home to four of the biggest cell
manufacturers, was also one of the first one to get onto the
electrification bandwagon. However, its preference for hybrids has
meant that demand and manufacturing capacity for Li-ion batteries
have not grown at the same rate as Greater China or Europe.
Although the installed capacity in the region at 72 GWh is
currently higher than in North America, the growth in the coming
years will be a lot lower as the demand shift toward
battery-electric vehicles (BEVs) will be gradual. Plant capacity
for Li-ion cells in the Japan/Korea region will grow at a CAGR of
about 18% between 2021 and 2027.

South Asia too will witness growth in Li-ion cell manufacturing
in the next five years although it will be at much smaller scale in
comparison with other regions. South Asia will have about 68 GWh of
installed capacity in 2027. The growth will mainly come on the back
of India, which recently announced a new production linked
incentive (PLI) scheme for advanced chemistry cell (ACC)
manufacturing. Under the scheme, the government aims to have a
cumulative 50 GWh of ACC manufacturing facilities in India.

AutoTechInsight provides a wealth of original thought leadership,
data, and analysis on a broad spectrum of automotive industry
topics and sectors. Visit AutoTechInsight
to view all our offerings.

Fluid production in relation with the increased electrification.

Is the Philippines on track to becoming a crypto hub?